We will now prove Talagrand’s majorizing measures theorem, showing that the generic chaining bound is tight for Gaussian processes. The proof here will be a bit more long-winded than the proof from Talagrand’s book, but also (I think), a bit more accessible as well. Most importantly, we will highlight the key idea with a simple combinatorial argument.

be a Gaussian process, and let

be a sequence of subsets such that

In order to make things slightly easier to work with, we look at an essentially equivalent way to state (1). Consider a Gaussian process

and a sequence of increasing partitions

, where increasing means that

is a refinement of

. Say that such a sequence

. Also, for a partition

, we will use the notation

for the unique set in

We can now state our main theorem, which shows that this is essentially the only way to bound

Theorem 2 There is a constant

such that for any Gaussian process

, there exists an admissible sequence

Recall that for a subset

, and in the last post, we proved the following “Sudakov inequality.”

Theorem 3 For some constants

is a Gaussian process, and let

We will use only Theorem 3 and the fact that

to prove Theorem 2 (so, in fact, Theorem 2 holds with

replaced by more general functionals satisfying an inequality like (4)).

First, we will specify the partitioning scheme to form an admissible sequence

, and then we will move on to its analysis. As discussed in earlier posts, we may assume that

is finite. Every set

will have a value

associated with it, such that

is always an upper bound on the radius of the set

, i.e. there exists a point

. Now, we assume that we have constructed

, and show how to form the partition

. To do this, we will break every set

pieces. This will ensure that

be the constant from Theorem 3. Put

which maximizes the value

A remark: The whole idea here is that we have chosen the “largest possible piece,” (in terms of

-value), but we have done this with respect to the

ball, while we cut out the

ball. The reason for this will not become completely clear until the analysis, but we can offer a short explanation here. Looking at the lower bound (4), observe that the balls

are disjoint under the assumptions, but we only get “credit” for the

balls. When we apply this lower bound, it seems that we are throwing a lot of the space away. At some point, we will have to make sure that this thrown away part doesn’t have all the interesting stuff! The reason for our choice of

is essentially this: We want to guarantee that if we miss the interesting stuff at this level, then the previous level took care of it. To have this be the case, we will have to look forward (a level down), which (sort of) explains our choice of optimizing for the

Now we continue in this fashion. Let

be the remaining space after we have cut out

to maximize the value

So far, we have been chopping the space into smaller pieces. If

, we have finished our construction of

. But maybe we have already chopped out

pieces, and still some remains. In that case, we put

, i.e. we throw everything else into

. Since we cannot reduce our estimate on the radius, we also put

We continue this process until

is exhausted, i.e. eventually for some

only contains singletons. This completes our description of the partitioning.

For the analysis, it will help to consider our partitioning process as having constructed a tree (in the most natural way). The root of the the tree is the set

, and its children are the sets of

. It will help to draw and describe

in a specific way. First, we will assign values to the edges of the tree. If

is a child of

are the constants from Theorem 3.

If we define the value of a root-leaf path in

as the sum of the edge lengths on that path, then for any

Thus in order to prove Theorem 2, which states that for some

it will suffice to show that for some (other) constant

Before doing this, we will fix a convention for drawing parts of

, we will draw them from left to right. We will call an edge

a right turn and every other edge will be referred to as a left turn. Note that some node

may not have any right turn coming out of it (if the partitioning finished before the last step). Also, observe that along a left turn, the radius always drops by a factor of

, while along a right turn, it remains the same.

We now make two observations about computing the value

up to a universal constant.

Observation (1): In computing the value of a root-leaf path

, we only need to consider right turns.

To see this, suppose that we have a right turn followed by a consecutive sequence of left turns. If the value of the right turn is

, then the value of the following sequence of left turns is, in total, at most

In other words, because the radius decreases by a factor of

along every left turn, their values decrease geometrically, making the whole sum comparable to the preceding right turn. (Recall that

, so indeed the sum is geometric.)

bothers you, note that we could artificially add an initial right turn into the root with value

. This is justified since

always holds. A different way of saying this is that if the path really contained no right turn, then its value is

Observation (2): In computing the value of a root-leaf path

, we need only consider the last right turn in any consecutive sequence of right turns.

Consider a sequence of consecutive right turns, and the fact that the radius does not decrease. The values (taking away the

. In other words, they are geometrically increasing, and thus using only the last right turn in every sequence, we only lose a constant factor.

We will abbreviate last right turn to LRT, and write

to denote the value of

, just counting last right turns. By the two observations, to show (6) (and hence finish the proof), it suffices to show that, for every root-leaf path

Recall that our tree

(which, recall, is just a subset

, we can talk about the value of the subset, which will be the sum of the values of the objects it contains. We will prove (7) by a sequence of inequalities on subsets.

, for which we will prove (7). Let’s prove the fundamental inequality now. We will consider two consecutive LRTs along

. (If there is only one LRT in

, then we are done by the preceding remarks.) See the figure below. The dashed lines represent a (possibly empty) sequence of left turns and then right turns. The two LRTs are marked.

With this inequality proved, the proof is complete. Let’s see why. We start with the first LRT. Since

, we have the inequality:

This gets us started. Now we apply the inequality of Figure A repeatedly to each pair of consecutive LRTs in the path

. What do we have when we’ve exhausted the path

? Well, precisely all the LRTs in

Now we are left to prove the inequality in Figure A. First, let’s label some of the nodes. Let

. The purple values are not the radii of the corresponding nodes, but they are upper bounds on the radii, recalling that along every left turn, the radius decreases by a factor of

. Since there are at least two left turns in the picture, we get a

upper bound on the radius of

Part of the inequality is easy: We have

. So we can transfer the red mark from

. We are thus left to prove that

This will allow us to transfer the red mark from

to the LRT coming out of

pieces, this was by our greedy partitioning algorithm using centers

. Since we cut out the

ball around each center, we have

. Applying the Sudakov inequality (Theorem 3), we have 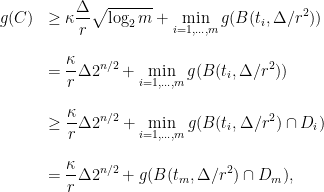 But now we claim that

This follows from two facts. First,

actually). Secondly, the radius of

was chosen to maximize the value of

over all balls of radius

, so in particular its

-value is at least that of the

Combining (9) and the preceding inequality, we prove (8), and thus that the inequality of Figure A is valid. This completes the proof.

5 thoughts on “The majorizing measures theorem”