After using it in the last post on non-positively curved surfaces, I thought it might be nice to give a simple proof of the Okamura-Seymour theorem in the dual setting. This argument arose out of conversations in 2007 with Amit Chakrabarti and former UW undergrad Justin Vincent. I was later informed by Yuri Rabinovich that he and Ilan Newman discovered a similar proof.

Note that establishing a node-capacitated version of the Okamura-Seymour theorem was an open question of Chekuri and Kawarabayashi. Resolving it positively is somewhat more difficult.

Theorem 1 Given a weighted planar graph

, there is a non-expansive embedding

By rational approximation and subdivision of edges, we may assume that

is unweighted. The following proof is constructive, and provides an explicit sequence of cuts on

whose characteristic functions form the coordinates of the embedding

. Each such cut is obtained by applying the following lemma. Note that for a subset

of vertices, we use the notation

, for the graph obtained from

by contracting the edges across

be the boundary of a face of

. There exists a cut

Proof: Fix a plane embedding of

the boundary of the outer face. Since

is a cycle, and since

is bipartite and has no parallel edges,

of distinct vertices on

. There is a unique path from

if, in the plane embedding of

lies in the closed subset of the plane bounded by

(Note that the direction of

is significant in the definition of “lying below,” i.e., belowness with respect to a path in

. We use this notion of “lying below” to define a partial order on the paths in

if every vertex in

We now fix the pair

so that the following properties hold: 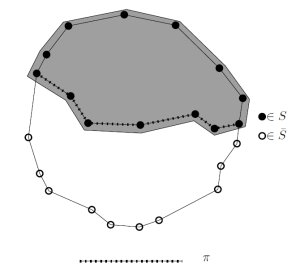 Note that a suitable pair

. Finally, we define the cut

does not lie strictly below

satisfies the conditions of the lemma.

For the rest of this section, we fix the pair

as defined in the above proof.

be distinct vertices on

the lemma holds trivially, so assume

. Also assume without loss of generality that

imply that all vertices in

is bipartite, the cycle formed by

must have even length; therefore,

be distinct vertices on

there is nothing to prove. If not, we can write

denote the endpoints of

is a shortest path, we have

The latter quantity is precisely

which completes the proof since

be arbitrary and distinct. It is clear that

, so it suffices to prove the opposite inequality. We begin by observing that

be a path in

that achieves the minimum in the above expression. First, suppose

. Then we must have

and we are done.

. Then, there exists at least one vertex in

be the first such vertex and

the last (according to the ordering in

may be trivial, because we may have

where the first line follows from Eq. (1) and the definition of

. If at least one of

and we are done.

is bipartite, this means

. Using these facts, we now derive

Using this in (**) above and noting that

. This completes the proof.

Proof of Theorem 1: Assume that

-connected. We may also assume that

is bipartite. To see why, note that subdividing every edge of

by introducing one new vertex per edge leaves the metric

essentially unchanged except for a scaling factor of

We shall now prove the stronger statement that for every face

there exists a sequence of cuts

such that for all

. We prove this by induction on

The result is trivial in the degenerate case when

is a single edge. For any larger

is either a single edge or is

-connected. Furthermore, contracting a cut preserves the parities of the lengths of all closed walks; therefore

. By the above observations, we can apply the induction hypothesis to

corresponding to the image of

where the first equality follows from the property of

and the second follows from the induction hypothesis. This proves the theorem.

4 thoughts on “A geometric proof of Okamura-Seymour”