, we can consider more lenient kinds of mappings which are still suitable for many applications. For example, consider the unweighted

. It is known that any embedding of

into a tree metric incurs distortion

. On the other hand, if we delete a uniformly random edge of

, this leaves us with a random tree (actually a path)

such that for any

In other words, in expectation the distortion is only 2.

be a finite metric space, and let

be a family of finite metric spaces. A stochastic embedding from

is a random pair

is a non-contractive mapping, i.e. such that

We will now argue that every finite metric space admits a surprisingly good stochastic embedding into tree metrics. The next result is from Fakcharoenphol, Rao, and Talwar, following work by Bartal and Alon, Karp, Peleg, and West.

admits a stochastic embedding into the family of tree metrics, with distortion

We will need the random partitioning theorem we proved last time:

which satisfies, for every

From partitions to trees. Before proving the theorem, we discuss a general way of constructing a tree metric from a sequence of partitions. Assume (by perhaps scaling the metric first) that

-bounded. We will assume that

as follows. The nodes of the tree will be of the form

. In general, if the tree has a node of the form

The length of an edge of the form

. This specifies the entire tree

. We also specify a map

. We leave the following claim to the reader.

is the largest index with

Note, in particular, that

is non-contracting because if

Now we are ready to prove Theorem 1.

be a partition into singletons, and let

be the tree constructed above, and let

be the corresponding (random) non-contractive mapping.

where in the penultimate line, we have evaluated three disjoint telescoping sums: For any numbers

Since every tree embeds isometrically into

, this offers an alternate proof of Bourgain’s theorem when the target space is

. Since we know that expander graphs require

, this also shows that Theorem 1 is asymptotically tight.

In addition to the current sequence on Talagrand’s majorizing measures theory, I’m also going to be putting up a series of lecture notes about embeddings of finite metric spaces. The first few will concern random partitions of metric spaces, and their many applications.

, a natural way to proceed is by divide and conquer: Break the space into small pieces, do something (perhaps recursively) on each piece, and then glue these local solutions together to achieve a global result. This is certainly an important theme in areas like differential geometry, harmonic analysis, and computational geometry.

In the metric setting, “small” often means pieces of small diameter. Of course we could just break the space into singletons

, but this ignores the second important aspect in a “divide and conquer” approach: what goes on at the boundary. If we are going to combine our local solutions together effectively, we want the “boundary” between distinct pieces of the partition to be small. Formalizing this idea in various ways leads to a number of interesting ideas which I’ll explore in a sequence of posts.

in the plane, equipped with the

metric. If we break the square into pieces of side length

, then every piece has diameter at most

, and a good fraction of the space is far from the boundary of the partition. In fact, it is easy to see that e.g. 60% of the measure is at least distance

from the boundary (the red dotted line). 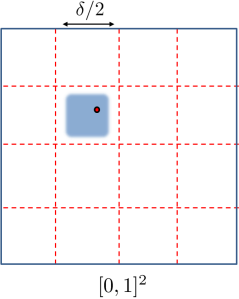 But there is a problem with using this as a motivating example. First, observe that we had both a metric structure (the

distance) and a measure (in this case, the uniform measure on

). In many potential applications, there is not necessarily a natural measure to work with (e.g. for finite metric spaces, where counting the number of points is often a poor way of measuring the “size” of various pieces).

To escape this apparent conundrum, note that the uniform measure is really just a distraction: The same result holds for any measure on

. This is a simple application of the probabilistic method: If we uniformly shift the

-grid at random, then for any point

Thus, by averaging, for any measure

there exists a partition where 60% of the

-far from the boundary. This leads us to the idea that, in many situations, instead of talking about measures, it is better to talk about distributions over partitions. In this case, we want the “boundary” to be small on “average.”

We will work primarily with finite metric spaces to avoid having to deal with continuous probability spaces; much of the theory carries over to general metric spaces without significant effort (but the development becomes less clean, as this requires certain measurability assumptions in the theorem statements).

be a finite metric space. If

for the unique set in

. We will also say that a random partition

-bounded if it is supported only on

-Lipschitz if, for every

Intuitively, the boundary is small if nearby points tend to end up in the same piece of the partition. There is a tradeoff between a random partition

increases, we expect that we can make

, and hence the “boundary effect,” smaller and smaller. The following theorem can be derived from work of Leighton and Rao, or Linial and Saks. The form stated below comes from work of Bartal.

We will prove a more general fact that will be essential later. For positive numbers

). The next theorem and proof are from Calinescu, Karloff, and Rabani.

which satisfies, for every

Observe that Theorem 1 follows from Theorem 2 by setting

be chosen uniformly at random, and let

be a uniformly random bijection

. We will think of

as giving a random ordering of

. We define our random partition

It is straightforward that

, with perhaps many of the sets

being empty. Furthermore, by construction,

To this end, fix

, and enumerate the points of

. We will say that a point

, and we will say that

.
(In the picture below, 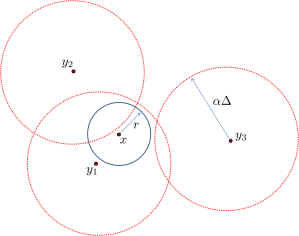 Observe that for any

Using this language, we can now reveal our analysis strategy: Let

be the minimal element (according to the ordering

can only occur if

. The point is that the fate of

is not decided until some point sees

Thus we can write,

To analyze the latter sum, first note that if

always. On the other hand, if

, but can never cut

by assumption, and setting

Now we come to the heart of the analysis: For any

The idea is that if

. But the probability that

Tightness for expanders. Before ending this section, let us mention that Theorem 1 is optimal up to a constant factor. Let

be a family of degree-3 expander graphs, equipped with their shortest-path metric

-Lipschitz random partition. By averaging, this means there is a fixed

which cuts at most an

-fraction of edges. But every

. Hence the partition must cut an

In the next post, we’ll see how these random partitions allow us to reduce may questions on finite metric spaces to questions on trees.