Now we’ll move away from spectral methods, and into a few lectures on topological methods.  Today we’ll look at the Borsuk-Ulam theorem, and see a stunning application to combinatorics, given by Lovász in the late 70’s.  A great reference for this material is Matousek’s book, from which I borrow heavily.  I’ll also discuss why the Lovász-Kneser theorem arises in theoretical CS.

We begin with a statement of the theorem.  We will think of the n-dimensional sphere as the subset of

Borsuk-Ulam Theorem: For every continuous mapping

, there exists a point

There are a couple of common illustrative examples for the case

.  The theorem says that if you take the air out of a basketball, crumple it (no tearing), and flatten it out, then there are two points directly on top of each other which were antipodal before.  Another common example states that at every point in time, there must be two points on the earth which both have exactly the same temperature and barometric pressure (assuming, of course, that these two parameters vary continuously over the surface of the eath).

The n=1 case is completely elementary.  For the rest of the lecture, let’s use

to denote the north and south poles (the dimension will be obvious from context).  To prove the n=1 case, simply trace out the path in

and going clockwise around

.  Simultaneously, trace out the path starting at

and going counter-clockwise at the same speed.  It is easy to see that eventually these two paths have to collide:  At the point of collision,

We will give the sketch of a proof for

, and note that our goal is to prove that

is antipodal in the sense that

, then by compactness there exists an

.  Because of this, we may approximate

arbitrarily well by a smooth map, and prove that the approximation has a 0.  So we will assume that

be a hollow cylinder, and let 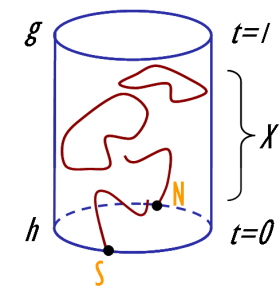 Also, let’s define an antipodality on

is antipodal with respect to

are antipodal.  For the sake of contradiction, assume that

Now let’s consider the structure of the zero set

, and these are h’s only zeros.  Here comes the sketchy part:  Since

is also smooth, and thus locally

can be approximated by an affine mapping

.  It follows that if

is not empty, then it should be a subspace of dimension at least one.  By an arbitrarily small perturbation of the initial

is sufficiently generic, we can ensure that

is either empty or a subspace of dimension one.  Thus locally,

should look like a two-sided curve, except at the boundaries

(if non-empty) would look like a one-sided curve.  But, for instance,

is represented by red lines in the cylinder above.)  But since there are only two zeros on the

sphere, and none on the

must contain a path

is antipodal with respect to

must take the value 0.

Notice that the only important property we used about

(other than its smoothness) is that is has a number of zeros which is twice an odd number.  If

had, e.g. four zeros, then we could have two

-symmetric paths emanating from and returning to the bottom.  But if

has six zeros, then we would again reach a contradiction.