This the first lecture for CSE 599S:  Analytical and geometric methods in the theory of computation.  Today we’ll consider the gap amplification problem for 2-prover games, and see how it’s intimately related to some high-dimensional isoperimetric problems about foams.  In the next lecture, we’ll use spectral techniques to find approximately optimal foams (which will then let us cheat at repeated games).

For a 3-CNF formula

denote the maximum fraction of clauses in

which are simultaneously satisfiable. For instance,

is satisfiable if and only if

. One equivalent formulation of the PCP Theorem is that the following problem is NP-complete:

Given a 3-CNF formula

(any answer is acceptable if neither condition holds).

are sets of questions, while

are sets of answers to the questions in

, respectively. There is also a verifier

which checks the validity of answers. For a pair of questions

, the verifier is satisfied if and only if

. The final component of

is a probability distribution

Now a strategy for the game consists of two provers

who map questions to answers. The score of the two provers

. This is just the probability that the verifier is happy with the answers provided by the two provers. The value of the game is now defined as

i.e. the best-possible score achievable by any two provers.

Now we can again restate the PCP Theorem as saying that the following problem is NP-complete:

Given a 2-prover game with

and answer NO if

is the set of clauses in

is the set of variables in

represents the set of eight possible truth assignments to a three-variable clause, and

represents the set of possible truth assignments to a variable.

is defined as follows: Choose first a uniformly random clause

, and then uniformly at random one of the three variables

is valid if the assignment

. The following statement is an easy exercise:

For every 3-CNF formula

The best strategy is to choose an assignment

to the variables in

.   At that point, he flips one of the literals to make his assignment satisfying (in this case, the chance of catching

is sent the variable that

Parallel repetition
A very natural question is whether the constant

in Formulation 2 can be replaced by

(or an arbitrarily small constant). A natural way of gap amplification is by “parallel repetition” of a given game. Starting with a game

, we can consider the game

is just the product distribution on

and the two provers then respond with answers

is satisfied if and only if

because given a strategy

, we can play the same strategy in every coordinate, and then our probability to win is just the probability that we simultaneously win

independent games. But is there a more clever strategy that can do better? Famously, early papers in this arena assumed it was obvious that

In fact, there are easy examples of games

.  (Exercise: Show that this is true for the following game devised by Uri Feige. The verifier chooses two independent random bits

. The answers of the two provers are from the set

. The verifier accepts if both provers answer

or both provers answer

Nevertheless, in a seminal work, Ran Raz proved the Parallel Repetition Theorem, which states that the value of the repeated game does, in fact, drop exponentially.

, there exists a constant

The exponent 3 above is actually due to an improvement of Holenstein (Raz’s original paper can be mined for an exponent of 32).

There are two special times of games which should be emphasized, depending on the structure of the mapping

. A projection game is one in which, for every

, there is at most one value

. In other words, after fixing an answer to the first question, there is at most a single answer to the second question which the verifier accepts. The 3-CNF game

, the second prover has to give the consistent assignment to the variable

Theorem 1.2: For every 2-prover projection game

Notice that in addition to the improved exponent of

, there is no dependence on

. (This dependence is known to be necessary for general games.)

Why do we care about the exponent?
Our main focus in this lecture will actually be on the exponent of

in the preceding theorems, so it seems like a good time to discuss its importance. For that, we need to introduce unique games.  This is a game where

, and the verifier behaves as follows. Given a pair of questions

, there exist a bijection

if and only if

. In other words, after fixing a pair of questions, for every answer of one prover there exists a unique answer of the other prover that satisfies the verifier.  (This is almost the same as satisfying the projection property from both sides, except that here we have enforced that after fixing

, there exists exactly one satisfying

instead
of at most one.)

Now we state Khot’s unique games conjecture (UGC), which has far-reaching consequences in hardness of approximation (and is the central open question in the field).

Conjecture (UGC): For every

such that the following problem is NP-complete: Given a unique game

and answer NO if

At present, there are very few good ideas on how to attack this conjecture, and there are differing beliefs about its truth. Observe that, unlike Formulations 1 and 2 above, in the YES instance, we now only require

.  Of course, this problem is harder than distinguishing

. In fact, this is fundamental: It is easy to design an efficient algorithm which checks whether

for a unique game.  (Exercise: Verify this.)

We now outline one possible approach to proving the UGC, in which the exponent of

becomes crucial. For an undirected graph

denotes the set of edges from

to its complement. Consider the following conjecture.

such that for every

, the following problem is NP-complete: Given a graph

, distinguish between the two cases

Note that this conjectured hardness (

) is tight, as shown by the Goemans-Williamson algorithm.  See also a recent spectral algorithm of Luca Trevisan that achieves the same bound.  From work of Khot, Kindler, Mossel, and O’Donnell (and the subsequent Majority is Stablest theorem, which we’ll get to later in the course), we know that the UGC implies the MAX-CUT conjecture. Might we prove that the two conjectures are actually equivalent?

To address this, let’s first observe that we can turn the MAX-CUT problem into a 2-prover unique game in a straightforward way. Given a graph

on questions is as follows. With probability

each: (1) Choose a uniformly random vertex

and ask the questions

, or (2) choose a uniformly random edge

and ask the questions

. The verifier is satisfied in case (1) only if the two provers give the same answer for

. The verifier is satisfied in case (2) only if the two provers give different answers. It only takes a moment’s though to see that the two provers should fix a maximum cut in the graph, and play according to it, yielding

Now we are ready to see that the two conjectures are equivalent if we can obtain a good-enough exponent in parallel repetition of unique games. To this end, let

be the infimal value of

such that there exists a constant

so that for every unique game

. A little better would show the equivalence of these two conjectures.

, then the the MAX-CUT conjecture implies the UGC.

Proof: The proof is straightforward: If

in the first case, and

in the other. Since

is a unique game whenever

is unique, this completes the proof.

MAX-CUT on a cycle

To this end, a number of authors have asked whether a strong parallel repetition theorem holds, i.e. whether

(even for general games).

The rest of the lecture follows Feige, Kindler, and O’Donnell.  We’ll consider a very simple unique game: MAX-CUT on an odd cycle, though we’ll slightly change the probabilities of our earlier verifier for the sake of convenience. We define the game

is specified by first choosing

uniformly at random, and then choosing

is chosen uniformly at random. As before, when

accepts only if the answers satisfy

accepts only if the answers satisfy

It is easy to check that for

since any cut in an odd cycle must have some some edge which doesn’t cross it (e.g. the edge with two green endpoints above). The point now is to understand the behavior of

Toward this end, consider the graph

whose vertex set is

and which has an edge

(this is also known as the

-cycle with itself).  For instance, here is

, where the dashed edges are meant to wrap around. 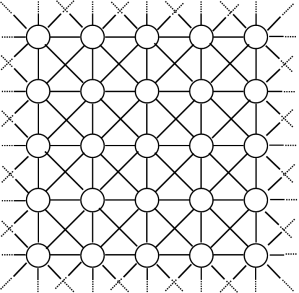 There is a natural embedding of

, which endows oriented cycles in

with a homotopy class from

Given such a cycle

to denote the corresponding element of the fundamental group.

wraps around the torus

is said to be topologically non-trivial if

.  This is the same as saying that

cannot be continuously contracted to a point in

.  The cycle is topologically odd if

is odd for some

.  Here are two topologically odd cycles on the 2-torus, corresponding to the classes , which is a bipartite graph with vertex set

, and with an edge

is an edge in

is said to be non-trivial or odd if its projection is.  Now consider the following problem.

Remove the minimum-possible fraction of edges

so as to delete all topologically odd cycles.

For example, here is a natural set of blocking edges (projected from 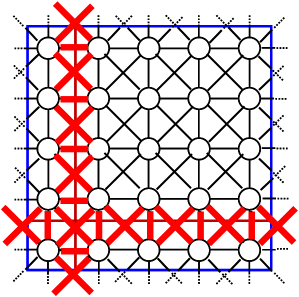 It turns out that this is just

in disguise.  For example, the above set of blocked edges corresponds to a strategy where

play each coordinate independently.  More generally, we have the following:

for the repeated game

correspond to pairs of questions

be the set of edges corresponding to questions on which

where we recall that

is the number of edges in

Say that an arbitrary set of edges

is blocking if removing

leaves no topologically odd cycles.  We need to show that every set of the form

is blocking, and that from every blocking set

, we can recover two provers

is not blocking.  Then there exists a cycle

is odd.  But if we consider the projection of

, then we get an odd cycle on which

play perfectly, which is clearly impossible.

On the other hand, consider an arbitrary blocking solution

.  From any connected component

.  Once this is set, since we cannot violate any edges in

, there is a unique greedy extension of

to the rest of

, then we must put

differ by 1 in the

, where the 1 occurs in the

th coordinate.  It is easy to see that this greedy assignment cannot fail precisely because there are no topologically odd cycles remaining in

(every bipartite graph has a cut which contains all edges).  Note that topologically trivial cycles are inconsequential since the coordinate projection of such a cycle results in a path.  This completes the proof.

so as to eliminate all topologically non-trivial cycles. It is easy to see that

because we can remove all topologically non-trivial cycles in

(and, in particular, all topologically odd cycles) by taking a set

of edges which do this for

and using the edges

Thus in order to “cheat” at the odd-cycle game, we only need to find small sets of edges whose removal blocks all non-trivial cycles.  In this next lecture, we will see how this is intimately related to foams which tile

, and how Dirichlet eigenfunctions help us find good foams.

[Credits:  Some pictures taken from this talk of Ryan O’Donnell.]

6 thoughts on “Lecture 1: Cheating with foams”